Metroid Prime - Raindrop effect on visor is not rendered correctly

Added by Rupeeclock over 1 year ago. Updated 7 days ago.

Metroid Prime (Gamecube)
Including a European version, and a US version with widescreen hack applied.

The raindrop effect on Samus' visor is not rendering correctly, where some droplets will display a portion of a black bar on the left side.
These droplets work by displaying a flipped-portion of what's drawn on screen relative to its position, this is usually noticeable by looking at droplets close to any geometry that contrasts the sky. 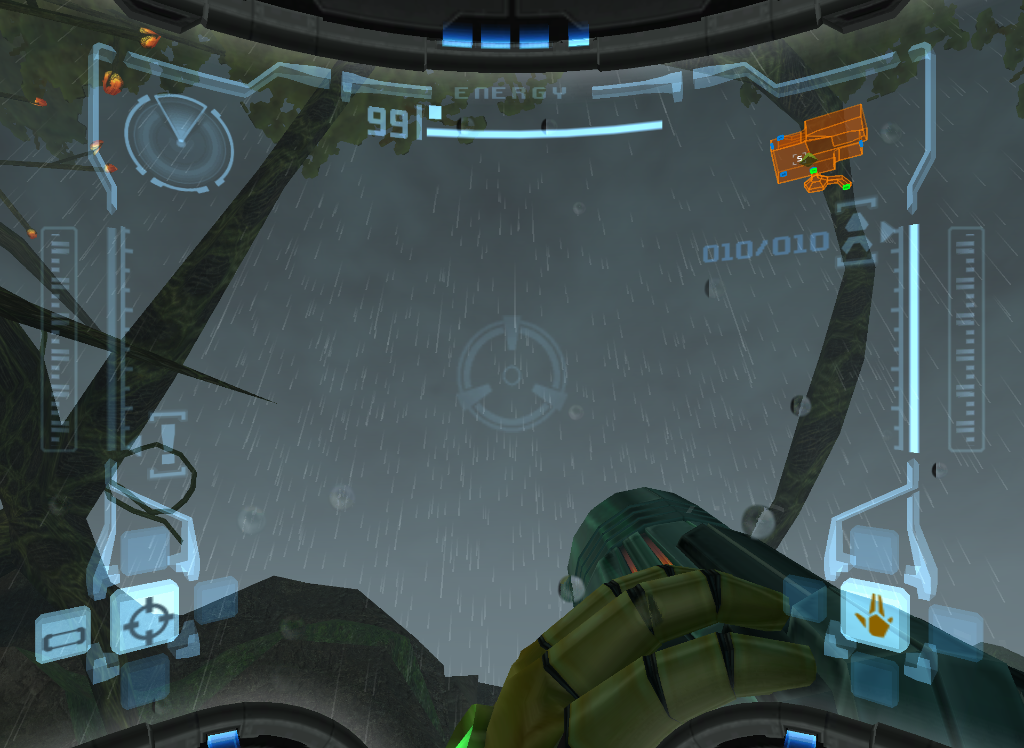 At beginning of game in Tallon Overworld's landing site, the landing area has rainfall.
Walking forward or looking skyward will generate raindrop effects on the visor.
Raindrops will not generate when standing still, standing in water, under cover, or when looking at the ground.

See attached screenshots from multiple devices.
Two FIFO recordings are attached in a single 7zip archive, one with Samus staring at the sky (raindrops), one with Samus submerged in water (no raindrops).
When recording the FIFO logs for the raindrops issue, the following warnings would repeat in alternating order until ignored:

Not ignoring these warnings would result in an excessively large log.
No such recording issue occurred when raindrops were not being rendered.

Updated by MayImilae over 1 year ago

I've seen this before but couldn't bother making a report, so I'm just going to mark this as accepted right away!

That said, there is a high likelihood that this is EFB scaling related. That should be the first thing to check.

Thanks, I've also just logged the following issue which is a device specific crash for Intel HD 615 graphics running Direct3D 11 in the same conditions.
https://bugs.dolphin-emu.org/issues/11496

I suspect that this crash is possibly related to this graphical issue, as the errors refer to DXTexture or Map failures in \core\videobackends\d3d\dxtexture.cpp

Most other graphics adapters or backends probably handle the error silently.

If I remember correctly, didn't Super Mario Sunshine have the same issue with its bubbles before Tev Fixes New?

Where specifically do the bubbles in questions appear? I'd be happy to try and reproduce the graphical issue.
Is it bubbles in paint, air bubbles when Mario is under water, etc?

In the paint, but those bubbles work nowadays.

I checked it out further and saw that the tev_fixes_new branch was merged in with 4.0-1192.

It doesn't look like this problem was caused by tev_fixes, but also wasn't an issue prior to it.

If someone wants to bisect when this started, that'd be great. We know it worked at some point and it's supposedly broken now.

I found out what caused the regression - no longer needing EFB2RAM. Guess what fixes this issue? EFB2RAM.

Should probably put a note on the wiki I guess.