Added by lemon-sherbet 2 months ago. Updated about 11 hours ago.

Trying to map the left or right stick from a classic controller (pro) connected to a wiimote as an emulated controller doesn't work, dolphin doesn't read the values correctly. The same controller works through bluetooth passthrough however.

Connect a Wiimote with a classic controller pro plugged in following the instructions here: https://dolphin-emu.org/blog/2020/04/05/dolphin-progress-report-february-2020/#50-11684-add-support-for-wii-remotes-over-inputcommon-by-billiard ; then open any input configuration dialog (for example, standard gamecube controller) and select device Bluetooth/#/Wii Remote. When attempting to map a stick directly by left clicking an input button and moving the stick in any direction, it does nothing (eventually it times out). Opening the menu for any input item with right click and scrolling down to the classic controller section reveals that dolphin isn't reading the inputs correctly: axis values under a certain unknown threshold display inf or 0 and values over that unknown value display nan. I have attached screenshots and a video demonstration. 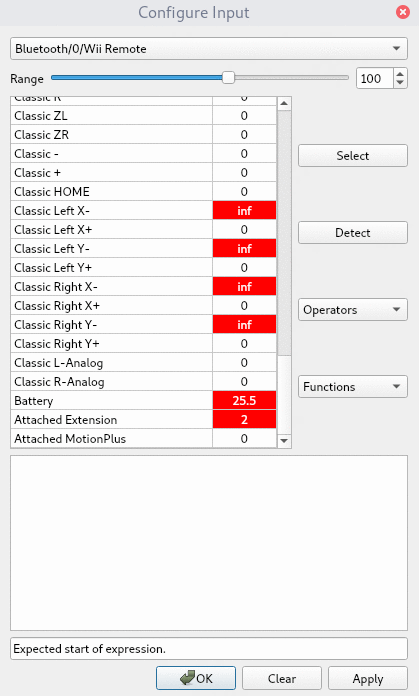 Using xwiishow to show input values outside of dolphin shows that the sticks do work as intended, however there's a calibration issue with the left stick (when left neutral it produces a significant input in the Y+ direction), which is probably not the source of the issue. This behaviour is also shown by using the device through bluetooth passthrough in dolphin.

Updated by musicalmitten 2 months ago

This isn't just an issue with the Classic Controller. I ran into the same problem with the analog stick on a regular Nunchuk when trying to configure InputCommon.

Updated by Billiard26 2 months ago

Updated by Billiard26 2 months ago

It looks like your extensions have faulty calibration data. We'll have to look out for this to provide fallbacks.

Updated by lemon-sherbet 2 months ago

This isn't just an issue with the Classic Controller. I ran into the same problem with the analog stick on a regular Nunchuk when trying to configure InputCommon.

Interesting. I tested it with my Nunchuk and it works as intended, for me it's only the classic controller that is an issue. Seems like Billiard26 says it only occurs with specific devices.

Updated by Billiard26 8 days ago

Updated by Billiard26 about 11 hours ago