Added by Dotti over 1 year ago. Updated 5 months ago.

While playing the game using the D3D12 backend, a graphics error message appears and the image freezes (the sound continues playing and it is still possible to use the controls too).
The error says:
Create failed in C:\buildbot\release-win-x64\build\Source\Core\VideoBackends\D3D12\DX12Texture.cpp at line 113:
Create D3D12 texture resource

It is not possible to ignore the error and continue playing. It is necessary to restart the game.

Play the game using the D3D12 backend (it did not occur while using OpenGL, however, the performance with D3D12 is better).
There is no specific stage or object that triggers the errors, it occurred 4 times and they were all random. The stages in which it happened are the ones below:
* Village of the Blue Maiden
* Desert of Doubt
* Palace of Winds
* The last Tingle minigame.
The Dolphin emulator is being used along with 2 mGBA emulators for the GC/GBA connectivity. It also happened while using VBA as the GBA emulator.

I did not test.

Error in the file attached (Error.PNG)

Updated by Miksel12 over 1 year ago

https://bugs.dolphin-emu.org/issues/11659 seems to be a similar issue which was fixed (seemingly) by a Windows update.

Updated by Avasam 5 months ago 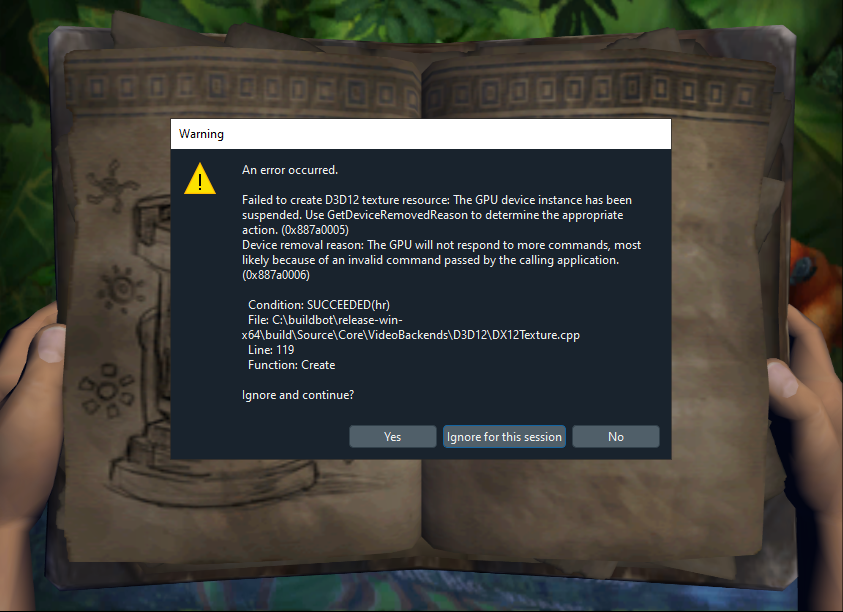